This Baked Sunday Mornings post was a bit out of my element. A ricotta cheesecake? The only cheesecake I now how to bake is a good ol’ cream cheese-loaded one. But I decided it shouldn’t be too hard and I tried it.

First of all, the crust was a cinch to put together. And I was really tempted to eat it once it came out of the oven–the smell and appearance were just that divine. The only problem I had was that the crust kept puffing up in the oven and while the recipe says to push it back down with the back of a spoon, this technique hardly helped. But you can’t go wrong with crust, even if it’s puffy. 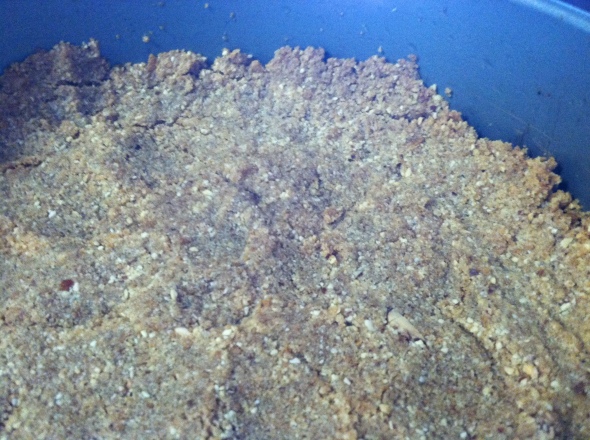 For the filling, I didn’t have a ton of trouble either. I did have to mix the ricotta and the other ingredients together in a bowl after the ricotta’s ride in the food processor, however, because of my tiny processor (flashback to my focaccia). But it still turned out creamy and magical.

I was kind of apprehensive about the baking, since I wasn’t using a thermometer to measure the cheesecake’s internal temperature (I had no clue where my family’s thermometer was and there was no way I was going to scavenge for it). I used the way described in the recipe to check for doneness without a thermometer–I made sure the outside ring was set and that the center was firm, yet wobbly. And you know, this method worked just fine! So, if you don’t want to bake something because of the equipment the recipe calls for, check to see if there are ways around using the equipment.

Then came the final steps: toasting the sliced almonds for the top, and decorating the cheesecake with the almonds and sifted confectioners’ sugar. After waiting for the cheesecake to chill, of course. The recipe recommends 4-6 in the refrigerator, but since I left my cheesecake out to cool while I was at work (around five hours), the cheesecake only needed an hour or two to chill. 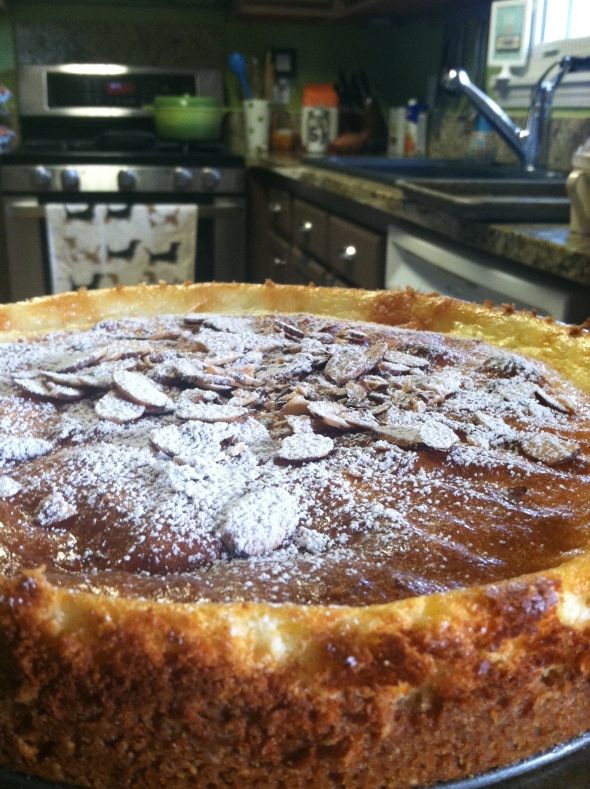 While my crust didn’t reach above the cake like the Baked boys’ did, it looked beautiful and tasted great. It was different than other desserts I’ve made (the boys say it’s a little bit American, a little bit Italian, like themselves), but the ricotta lent a lightness and freshness that cream cheese can’t. The cheesecake also had such a summery, fresh fragrance from the almond extract and orange zest. The combination of the three main ingredients was so effortlessly delicious and I think that this cheesecake is the perfect summer cheesecake.

I did have to make a few substitutions because of availability and time. Instead of fresh ricotta, I had to use the container stuff. And instead of sliced, blanched almonds, I used sliced, unblanched almonds. I also omitted the amaretto because my family doesn’t drink/cook and bake with it, so it would have been sitting on a shelf for the rest of its life. These aren’t huge changes and my cheesecake still came out great.

Check out what the other Baked Sunday Mornings bakers thought about this recipe here!

Recipe from Baked Elements: Our 10 Favorite Ingredients by Matt Lewis and Renato Poliafito.