For my Magnet school’s senior trip, we went to Washington, D.C. It was incredibly beautiful, interesting, and way different than any other city I’ve been to. The history, art, and sights were something to see, and I tried (unsuccessfully, for the most part) to get some good photos with my iPhone’s camera. Needless to say, I’ve learned my lesson once again: bring an actual camera on vacations. Anyway, I’m going to share some pictures and memories from my trip, as well as discuss each place I visited.

Me standing in front of the White House’s back entrance.

We left on Wednesday (at 4 am ugh). Obviously there wasn’t much to that day except a 10 or so hour ride. We did, however, get to tour the University of Virginia and eat at Union Station. UVA was okay, but it didn’t seem spectacular to me. Union Station was pretty cool, though. While we didn’t ride any trains, we got some food to eat. And I also found my way to the closest cupcake shop there 🙂

Thursday: We woke up and left for the White House. After visiting, it didn’t seem as impressive as I thought it would be. Nevertheless, it’s a place I think all Americans should visit at least once in their lives. Plus, seeing a tourist argue with a secret service agent about taking photos was an interesting experience. After the White House, we went to two Smithsonians. The National Museum of Natural History was first. It was really cool, but after visiting Fernbank more than a few times, the dinosaurs were just dinosaurs. The minerals and jewels, however, were GORGEOUS. After some fossils and gems, we went to the Air and Space Institute. Ever since I was younger, my dad and I have bonded over airplanes, so this was a pretty awesome museum to go to.

Old airplanes hanging from the ceiling of the Air and Space Institute.

Thursday night, we visited four memorials: the Lincoln Memorial, the Vietnam Veterans Memorial, the Korean War Veterans Memorial, and the Iwo Jima National Memorial. All of these, especially the last three, were awe-inspiring. I’ve never really felt an overwhelming feeling of patriotism, but I finally did after realizing how many men and women have sacrificed their lives for our nation. 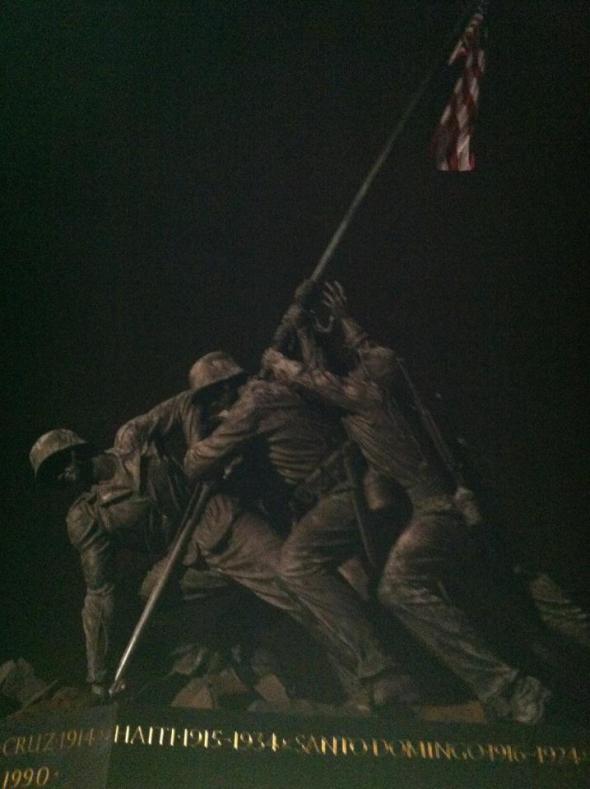 The famous statue of three soldiers who fought for the U.S. at the Iwo Jima National Memorial.

Friday: Our first stop of the day was Georgetown. I instantly fell in love with this college. And then I discovered that it doesn’t have a journalism major. So.

An example of Georgetown’s magnificent beauty.

We then went to the Library of Congress and the U.S. Capitol. All of us Magnet kids completely nerded out. The Library was the most beautiful building in D.C. and we experienced something insanely cool at the Capitol–we got to sit on the floor of the House of Representatives, a privilege only allowed to those with special permission. I discovered that I could never be a representative because my feet don’t touch the ground when I’m sitting in the chairs. Alas.

While the books were great in the Library of Congress, its art was one of my favorite things I saw on the trip.

In the night, we toured more D.C. monuments. We stopped at the Thomas Jefferson Memorial, the FDR Memorial, the MLK Jr. Memorial, and the WWII Memorial. I really like FDR, so his memorial was the coolest for me. 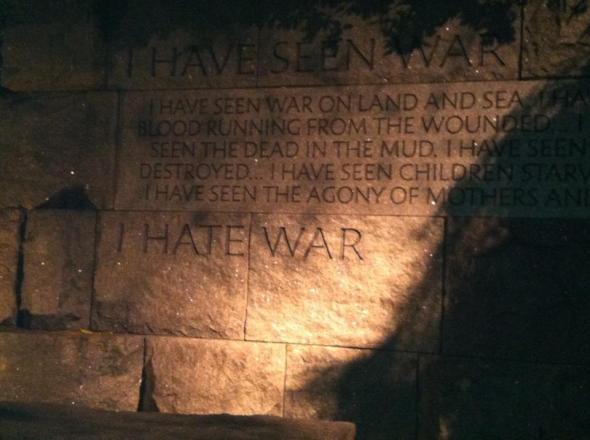 Some of FDR’s famous words, found at the FDR Memorial.

After waking up super early Saturday morning, we departed to Arlington National Cemetery. We saw JFK’s and his family’s graves and the changing of the guard in front of the tomb of the unknown soldier. It definitely made the sacrifices people make for our country very real to me.

Seeing all of the tombstones at Arlington National Cemetery made war seem so real.

After a drive down Embassy Road (I was excited to see the Belgian embassy because I have family that lives in Belgium!), we left back for good ol’ Georgia.

D.C. was one of my favorite places I’ve been to, and I wouldn’t mind going back again 🙂